Can I Laugh Now? *Encouraging you to see the humor in life’s embarrassing moments.

“Resist him, standing firm in the faith, because you know that your brothers throughout the world are undergoing the same kind of sufferings. And the God of all grace, who called you to his eternal glory in Christ, after you have suffered a little while, will himself restore you and make you strong, firm, and steadfast. To him be the power for ever and ever. Amen.” 1 Peter 5: 9-11

This week we have a guest post from Amy of Silent Confessions of a Southern Belle. She tells us all about her celebrity encounter with R&B superstar, TreySongz! (Don’t hate!) 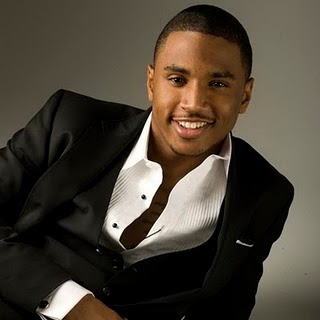 I have had many celebrity crushes in my lifetime but none like the one that I have on R&B singer Treysongz. I remember when Trey first came on the scene back in 2005 with his hit single “Gotta Make It.” I thought he was cute and enjoyed his music but it wasn’t until 2007 when he released the cd Ready that I fell in love! Y’all remember the video for “I Need a Girl” when he was running on the beach with his shirt open and flashing that beautiful smile!?? Goodness I smile just thinking about it, LOL!! I remember thinking to myself how great it would be if I could just meet him. 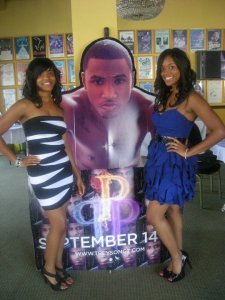 In 2010 the opportunity to meet Trey finally presented itself. I was living in Memphis, TN attending graduate school at The University of Memphis and TreySongz had just kicked off his tour to promote his upcoming cd Passion, Pain & Pleasure. He was scheduled to come to Memphis so of course I had already bought my ticket. One day when I was getting ready for class I heard a commercial on K97 about a contest to meet TreySongz. Devin Steele, one of the DJ’s for K97 announced that the rules of the contest were to upload a one minute video explaining to everyone in Memphis why you were TreySongz’ biggest fan. The city would vote on the videos and the five people with the highest amount of votes would get to bring a friend to a private sound check pamper party to meet Trey and would also win tickets to show. I almost passed out!! I immediately called my sister and told her the good news!! We only had a week to make the video so we both started brainstorming up ideas. My sister and I are twins so we decided to use that as a gimmick for our video. We did a competitive video going back and forth with each other about who was the biggest fan! LOL we even had matching t-shirts made! (Don’t judge me!) We uploaded our video to the contest website and the voting began. After looking at the other contestants’ videos we knew we had this in the bag! Our video was the best hands down!! We immediately hit up our Facebook and Twitter friends and sent harassing text messages to everyone that we knew telling them to vote for our video. Me and my sister even worked in shifts sometimes staying up all night to vote on the video! (Psychotic, I know. LOL!) Finally after a week of voting the contest was over and we came in second place. 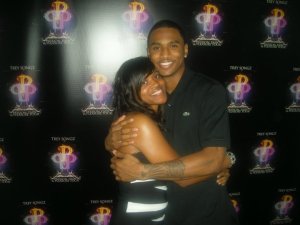 The day of the pamper party we could hardly control our excitement; reality sunk in that we were finally going to meet the man of our dreams! We arrived at the private location inside of the Orpheum Theater where we met the other winners. The party room was decorated with pictures of Trey and music was playing from some of his past and present cd’s. We were all given gift bags, served champagne and food, and were offered free massages. After socializing for about an hour everyone started to question where Trey was. With only 30 minutes remaining for the party Trey’s manager finally announced that he was on his way. She told us to act like adults and requested that we not scream when he walked in the room. A few minutes later Trey walked inside of the room and everyone stared at him and smiled. Trey went around the room and greeted all of us with a warm, friendly hug. Afterwards we were instructed to line up for individual pictures with him. I was at the end of the line and my heart was racing a thousand miles per hour! I had so much that I wanted to ask him but when it was finally my turn to get a picture with him all I could muster was a measly “hey.” He looked at me and then at my sister and asked were we related. I told him yes and that we were twins. He smiled and said that we were some cuties. I shyly looked down to the floor and said thank you. We took our picture and after about 30 seconds it was over. After everyone took individual pictures with Trey, we all took group pictures with him and afterwards we were instructed to line up for autographs. The process was so rushed that all we had time to say to him was hello and goodbye. After only about ten minutes it was all over. Trey gave us a wave and he was quickly out the door. I couldn’t explain the way I felt. I was really happy that I got the opportunity to meet him but at the same time I wanted more. After the party was over we left and started getting ready for the concert. 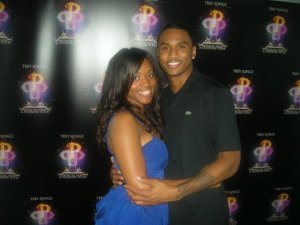 When we arrived back at the Orpheum for the show we discovered that we had really good seats and were very close to the stage. When Trey hit the stage the crowd went absolutely crazy! He really knew how to interact with the fans and gave people shout outs in the audience. Towards the end of the show Trey announced that he was going to pull a young lady on the stage for a massage. All the women in the crowd started going crazy screaming for Trey to please pick them!! Trey started walking around the stage and scanning the crowd. I was determined to be the girl that he chose so I jumped up in my seat and started waving my hands. Finally Trey stopped in the middle of the stage, pointed his finger out in the audience and said, “You!” Everyone looked around to see who he was talking about. I saw his security guard walking in my direction and my heart started to race. He came up to my seat, reached for my hand and…TO BE CONTINUED!

Now, Laughers, you didn’t think Amy was going to give it away all at once did you?! What kind of girl do you think she is?! Lol! Stay tuned for her hilarious conclusion!