*Turning Pain Into Laughter Since 2011*

There is nothing more annoying, and rather childish, than someone airing their dirty laundry on social media. Well, I guess there is one thing more annoying, someone airing YOUR dirty laundry on social media. How many times have you read someone’s Facebook status or a tweet and wondered who they were talking about or lashing out at? How many times have you had the gut feeling that someone was talking to or about you through Facebook or Twitter?

Before Facebook came along in 2004, if you had an issue with someone or needed to get something off your chest you had to either call or go and talk to that individual face to face; or take the cowardly way out and send an email.  Today there is an even easier way to hide and face someone at the same time…Social Media!  Social media seems to be the equivalent to picking up the phone and calling someone.  It has, for some, become THE best way to air your problems against friends, family, and enemies.  I mean that’s exactly what Mark Zuckerberg had in mind when he started Facebook right? He wanted to create a way for all the whining, immature, “woe is me” people to get attention and be heard. Wrong genius! Connecting, networking, and keeping in touch with friends and family is the main purpose for social media.  I’m going to give you 5 REALLY GOOD REASONS why you should not subtweet or send subliminal messages via Facebook, Twitter and Instagram.  Pay attention, this just might save your life…or help you “get yo life”, or “have a seat.” 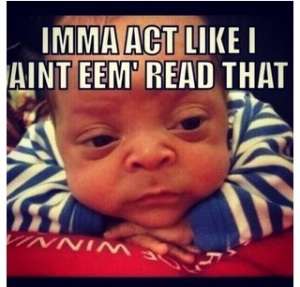 #1: No one cares!  Seriously, no one cares that your friend stabbed you in the back; or your ex bf or gf is in a new relationship and they’re posting pics and it’s hurting your feelings; or that you’re heartbroken and you want the culprit to know exactly what they did and how it made you feel.  Newsflash, the culprit already knows what they did.  For example, I don’t need you to post something like a mean Facebook status or tweet, or one of those pics on Instagram that point out the difference between “a woman and a how” for me to realize that I’m a hoe (which I am not, that football team is lying). If I’m a hoe, that’s a life choice that I have made and apparently I am loving it, otherwise I would have changed by now (again the football team can’t be trusted, they’re a bunch of liars, I don’t know any of them, lol).

#2: It’s annoying and it makes you look pathetic.  Everyone sees you as the weak one.  We’re all thinking, “Geez, this girl/dude must have put a root on you!”  When I scroll down my timeline and all I see are pics and tweets with these pitiful, sad life quotes, I quickly want to unfollow you.

#3: The person you are directing your subtweets, FB status, and Instagram pic towards…DOESN’T CARE!  Let me tell you what happens when they see something you’ve posted and they know you’re talking about them.  They screenshot it and send it to all their friends and they LAUGH at you.  And if they’re really bold and heartless, they repost it.  Don’t believe me? Ok, but just know that I myself have done a screenshot and had a GroupMe conversation about a post that was directed towards me…and yes we laughed about how STOOpid and immature this person was to use Instagram to air his issues with me.  Just @ me bruh! And no, I’m not perfect or an expert on this issue, because I have also posted something in hopes that a certain person would see it and know that I was talking about them. And it didn’t work! They didn’t care and I was still upset and hurt.

#4: You give the other person the upper hand.  That person now knows that you are sitting at home worrying about them, missing them.  They can gage the affect they have on you, and they now have the upper hand.

#5: It’s a waste of time.  No pic, subtweet, or status is going to make a person change.  They are who they are and there is nothing you can do about that.

What you CAN do is go on with your life.  Don’t give someone that much power over you that you step outside of your character and start doing things or acting in ways that make you unrecognizable to your family and friends.  So start @’n these people instead of talking slick.  And what I mean by that is if you want to talk to that person, call them.  If they answer, talk.  If they don’t, call their mom and talk her ear off.  She’ll be so annoyed and mad that you called her, she’ll make her son/daughter call you back…I kid, I kid! But seriously, move on.  Time is going to pass anyway, you might as well start the healing process of getting over that relationship or that friendship or that family member that hurt you.  And there is always that special someone that will always answer when you need to talk…no not Grandma…God.  He said He’ll never leave you or forsake you. Call Him!

Until next time Laughers…Keep Laughing!